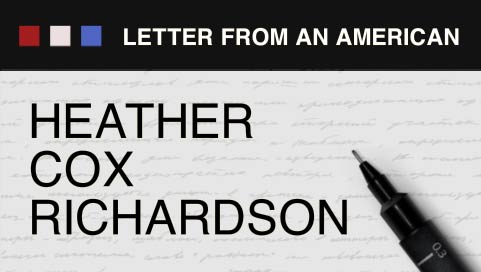 We are in what feels like a moment of paradigm shift.

On this, the third day of Russia’s 2022 invasion of Ukraine, it appears the invasion is not going the way Russian president Vladimir Putin hoped. The Russians do not control the airspace over the country, and, as of tonight, despite fierce fighting that has taken at least 198 Ukrainian lives, all major Ukrainian cities remain in Ukrainian hands. Now it appears that Russia’s plan for a quick win has made supply lines vulnerable because military planners did not anticipate needing to resupply fuel and ammunition. In a sign that Putin recognizes how unpopular this war is at home, the government is restricting access to information about it.

Russia needed to win before other countries had time to protest or organize and impose the severe economic repercussions they had threatened; the delay has given the world community time to put those repercussions into place.

Today, the U.S. and European allies announced they would block Russia’s access to its foreign currency reserves in the West, about $640 billion, essentially freezing its assets. They will also bar certain Russian banks from the Society for Worldwide Interbank Financial Telecommunication system, known as SWIFT, which essentially means they will not be able to participate in the international financial system. Lawmakers expect these measures to wreak havoc on Russia’s economy.

The Ukrainian people have done far more than hold off Putin’s horrific attack on their country. Their refusal to permit a corrupt oligarch to take over their homeland and replace their democracy with authoritarianism has inspired the people of democracies around the world.

The colors of the Ukrainian flag are lighting up buildings across North America and Europe and musical performances are beginning with the Ukrainian anthem. Protesters are marching and holding vigils for Ukraine. The answer of the soldier on Ukraine’s Snake Island to the Russian warship when it demanded that he and his 12 compatriots lay down their weapons became instantly iconic. He answered: “Russian warship: Go f**k yourself.”

That defiance against what seemed initially to be an overwhelming military assault has given Ukraine a psychological edge over the Russians, some of whom seem bewildered at what they are doing in Ukraine. It has also offered hope that the rising authoritarianism in the world is not destined to destroy democracy, that authoritarians are not as strong as they have projected.

President Volodymyr Zelensky of Ukraine has stepped into this moment as the hero of his nation and an answer to the bullying authoritarianism that in America has lately been mistaken for strength. Zelensky was an actor, after all, and clearly understands how to perform a role, especially such a vital one as fate has thrust on him.

Zelensky is the man former president Donald Trump tried in July 2019 to bully into helping him rig the 2020 U.S. election. Then, Trump threatened to withhold the money Congress had appropriated to help Ukraine resist Russian expansion until Zelensky announced an investigation of Joe Biden’s son Hunter.

Since the invasion, Zelensky has rallied his people by fighting for Kyiv both literally and metaphorically. He is releasing videos from the streets of Kyiv alongside his government officers, and has been photographed in military garb on the streets. Offered evacuation out of the country by the U.S., he answered, “I need ammunition, not a ride.” His courage and determination have boosted the morale of those defending their country against invaders and, in turn, captured the imagination of people around the world hoping to stem the recent growth of authoritarianism, who are now making him—and Ukraine—an icon of courage and principle.

In a sign of which way the wind is blowing, today Czech president Miloš Zeman and Hungary’s prime minister Viktor Orbán, both of whom have nurtured friendly relations with Putin, came out against the invasion. Zeman called for Russia to be thrown out of SWIFT; Orbán said he would not oppose sanctions. Even Fox News Channel personality Tucker Carlson has begun to backpedal on his enthusiasm for Russia’s side in this war.

Trump lawyer Rudy Giuliani, who was part of the scheme to get Zelensky to announce an investigation of Hunter Biden, today got in on the act of defending Ukraine. He tweeted: “The Ukrainian People are fighting for freedom from tyranny. Whether you realize or not, they are fighting for you and me.” But then he continued: “And our current administration is doing the minimum to support them, even though Biden’s colossal weakness and ineptitude helped to embolden Putin to do it.”

The right-wing talking point that Biden is weak and inept and therefore emboldened Putin to invade Ukraine is belied by the united front the western world is presenting. After the former president tried to weaken NATO and even discussed withdrawing from the treaty, Biden and Secretary of State Antony Blinken have managed to strengthen the alliance again. They have brought the G7 (the seven wealthiest liberal democracies), the European Union, and other partners and allies behind extraordinary economic sanctions, acting in concert to make those sanctions much stronger than any one country could impose.

They have managed to get Germany behind stopping the certification of Nord Stream 2, the gas pipeline from Russia to Germany that would have tied Europe more closely to Russia, and in what Marcel Dirsus, a German political scientist and fellow at the Institute for Security Policy at Kiel University, told the Washington Post was possibly “one of the biggest shifts in German foreign policy since World War II,” Germany is now sending weapons to Ukraine and has agreed to impose economic sanctions.

Biden has facilitated this extraordinary international cooperation quietly, letting European leaders take credit for the measures his own administration has advocated. It is a major shift from the U.S.’s previous periods of unilateralism and militarism, and appears to be far more effective.

Asked tonight what he would do differently than Biden in Ukraine, former president Trump answered: ​​“Well, I tell you what, I would do things, but the last thing I want to do is say it right now.”

For all the changes in the air, there is still a long way to go to restore democracy.

There is also a long way to go to restore Ukraine. Tonight the Russians are storming Kyiv.