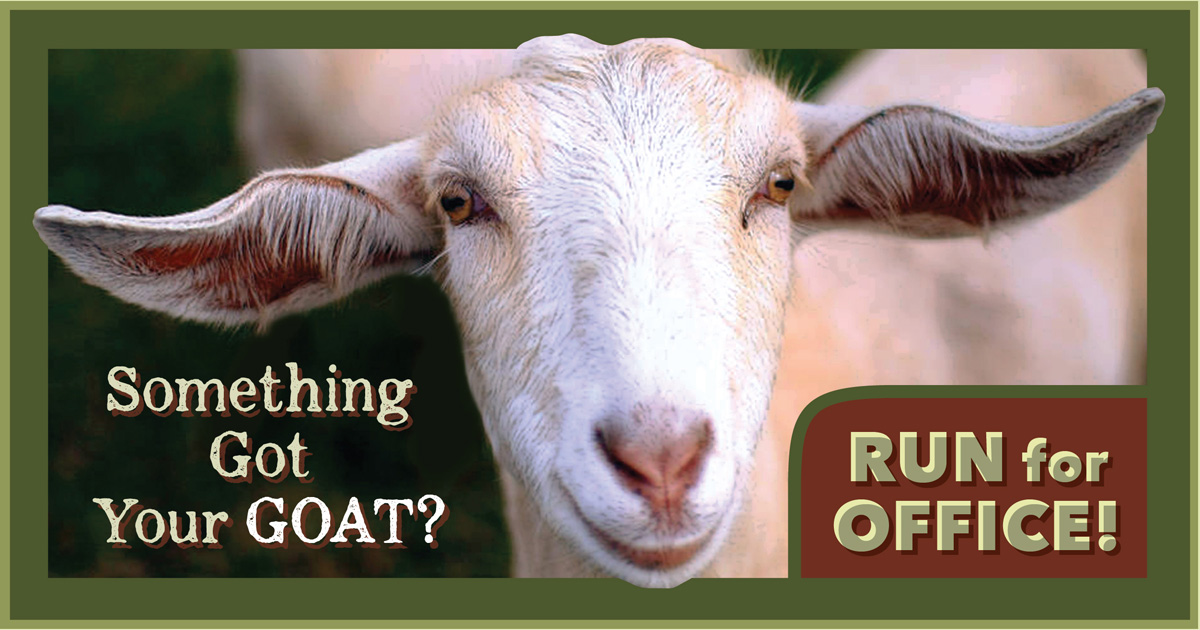 You, Yes YOU, Can Run for Office!

Are you bursting with ideas to improve your community, and believe it’s better to express them someplace other than Facebook? Are you passionate about building coalitions devoted to meaningful change? Do people say, “You should run for office”?

These pages will help you decide if public service is for you (or someone close to you that you would like to support). Here are some general qualifications for serving as an elected leader in Delaware County, NY.

Get a document of all of the information on this page by downloading the PDF.

You can run for office if you:

You might just be a public servant ready to be elected!

Please note that the list above does not include experience holding public office. At the local level, we are often looking for community leaders from all walks of life, with fresh energy and ideas. So don’t let lack of public office experience stop you and remember you don’t run for office alone. It is absolutely a team effort!

Let’s talk and see if we can join forces to effect positive change in Delaware County.

What Can I Run For?

Let’s get started! You are thinking about running, but not sure exactly what there is to run for? We have you covered. Review the list below and see if there is a fit for you. These are the elected positions found at the town level in Delaware County. Each position has its own responsibilities and compensation. The descriptions are generalized and specific job requirements should be verified with each Town Office for accuracy as they vary from town to town and by changes in town ordinances.

Now that you know what the responsibilities are for the positions, find your town and see what offices are up for grabs in the next election! Year 2023 is all about local. Almost all of the positions described above are listed per town below! Do you see any that interest you?

Also happening this year are Village and School Board elections!  Many of the village positions echo town positions in job descriptions, but village and school boards have their own salary schedules, and election calendars.  While the Board of Elections supports the village and school boards with equipment and some administration, the elections are managed mainly by the villages and the school boards themselves.  While the election calendar is the same, the process and procedures differ from village to village. Contact your village clerk for more information.  And, yes!  If you’re a Democrat and would like the Delaware County Democratic Committee’s help in your village or school board campaign, please contact the Chair of your town’s Democratic Committee, or the Chair of the DCDC.

Town committees are as grassroots and you can get! It’s where Democrats come together to discuss political issues and work to get Democrats elected to office. We work:

So, maybe you’re not ready to run, at least not this year, but still want to be where the action is? Join your local Town Democratic Committee! You’ll learn how to run a campaign by volunteering with one. Several towns have openings and some have no committee at all.  If that’s your town, we’ll help you start one with the support of the town next door.

Democratic Committee memberships are an elected position! The election process involves gathering signatures on petitions once every odd year, following the same process that all candidates use to get on the ballot. The number of signatures required is usually nominal and varies by election district. Should there be more petitions (for candidates) submitted than there are committee seats, then the candidates are placed on the ballot. The two candidates receiving the most votes in that election district would be the winners and seated on the Town Committee.

OK, How Do I Get Started?

So you’ve considered, and selected what you want to run for, now what? Get in contact! Almost every town has a committee standing by to ensure you succeed in your bid for public office. If your town does not have a committee,  reach out to the Delaware County Chair, Kathleen Hayek. These contacts will start to formalize your campaign with the necessary training, resources, and funds allocation to ensure you win!

Running for office is much like applying for a job, and your future employer is your community!  You’ll need to convince as many of your neighbors as possible that you’re the person they should “hire” with their vote. Your first interview is with your Town Committee. Convince them you’re the one for the job and you are well on your way to victory.

When Should I Get Started?

You will need to be ready to start collecting signatures on petitions that enable you to get your name on the ballot on February 28, 2023. That’s just around the corner!

Here are just a few of the important deadlines…

February 14—Last day to change enrollment before the June Primary. Changes made between February 15th and June 28th, will be effective on July 5th .

You’ll find the whole list of election deadlines at the Delaware County Board of Elections website:  http://www.co.delaware.ny.us/departments/elec/election_dates.htm

We suggest you add the important dates to your personal calendar now!

While you’re at the BOE website, print yourself a copy of their very informative and useful document, Running for Elective Office in New York State, http://www.co.delaware.ny.us/departments/elec/docs/2014%20Running%20For%20Elective%20Office.pdf  It’s got all the forms you’ll need to get started on collecting signatures and directions.

What Resources and Tools Will I Need To Run For Office?

You’ve selected the job you want. You know who to contact. Now it’s time to prepare a few background materials on yourself. You will want to:

Remember you will not do this alone!  You will lead a team of supporters who will have your back, who will help you run for office and win! 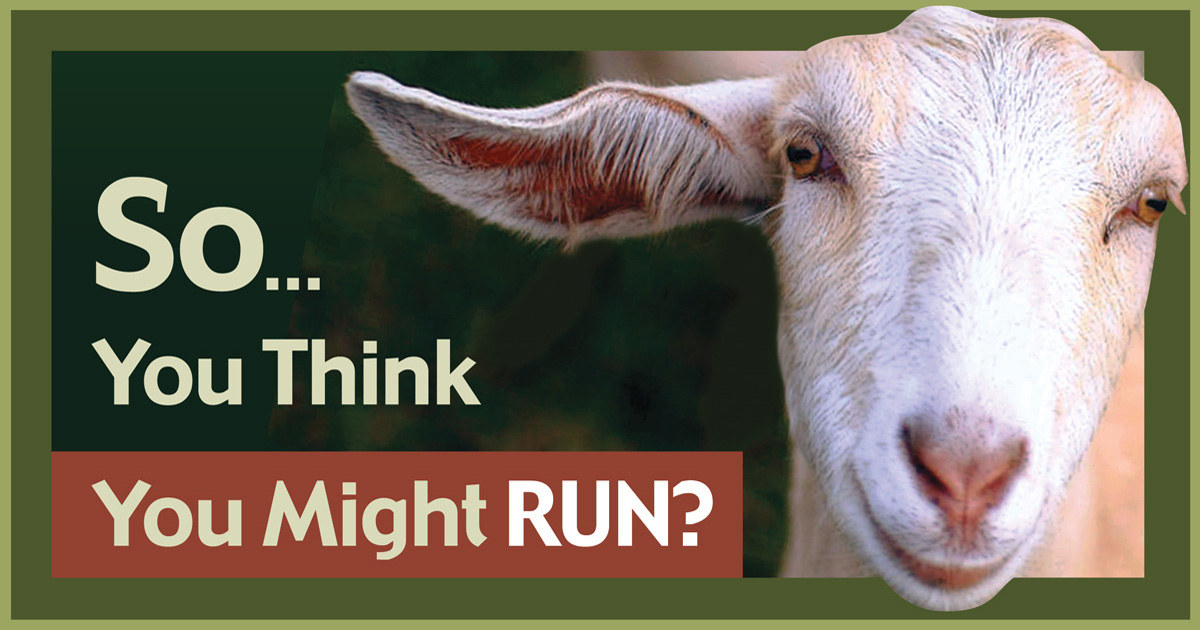 Join us on Saturday, January 28th for an introduction to running for local office sponsored by the Delaware County Democratic Committee.

Use the button below to download our Running for Office pdf.

Where Else Can I Get Support for My Campaign?

Besides the Democratic Committee, there are numerous Political Action Committees (PAC’s) that will help you run for office.  Choose one that best fits your issues or interests. Reach out to them! They may be willing to volunteer, host a meet the candidate event, Q&A panel, or may widen your network. It’s best to run a connected campaign, the more support you have the more success you’ll have. Here’s a starter list, but there are many many more.  Tip:  Google “Run for Office” for a long list of training opportunities and campaign resources!

Want to Support Others Running for Office?

Help us elect more Democrats in Delaware County!  Please make a donation to our 2021 Local Candidates! We’ll use your contribution for candidate training, ads, yard signs, campaign grants and get out the vote expenses, all spent right here in Delaware County! Thanks so much!

For a 9-10 page document of all of the above information click below.  Last updated, Jan 26, 2021.  Any corrections, edits, additions? Please email them to Kathleen at: chair@dcnydems.org.  Thanks!