Another Letter to the Editor 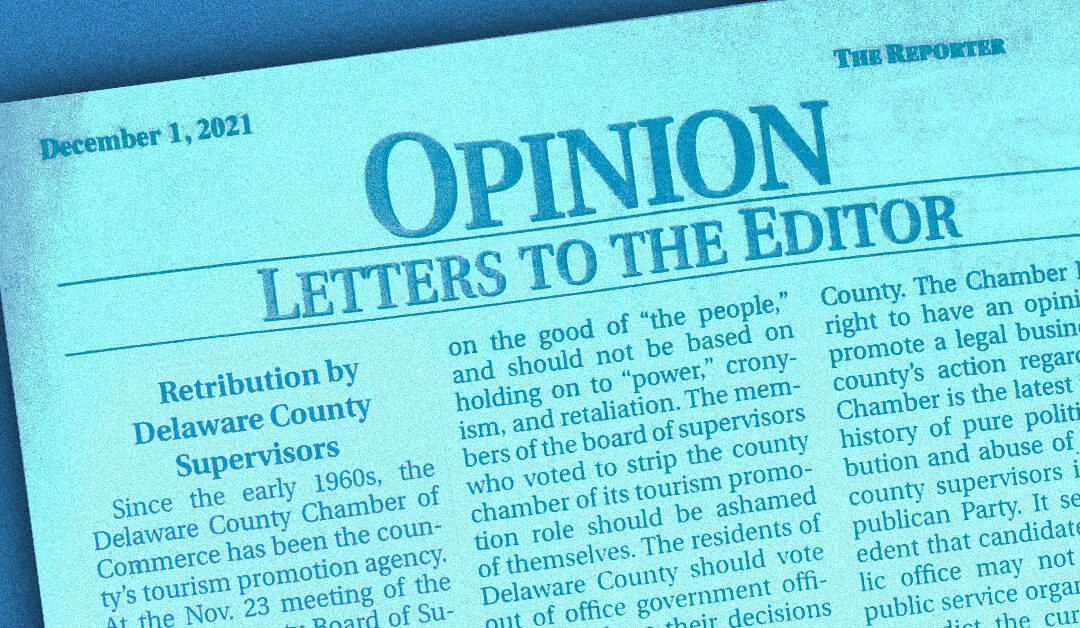 DelCo Supervisors Should
Be Ashamed of Themselves

The Delaware County Chamber of Commerce has represented Delaware County as its tourism promotion agency for over 60 years, with extremely positive results. Efforts to “get back” at the Chamber by the Republicans on the board of supervisors have been especially strong in this last election cycle, and seem to be in (large) part, the result of personal political reasons. As reported in The Reporter (11-24-21), “Pat Davis accused Pucci of recruiting political candidates to run against incumbent supervisors…” Davis is talking about Todd Pascarella, the chamber director who ran against Davis and Lillian Browne-Burdick, who ran against Joseph Cetta. Davis’ accusations of fiscal mismanagement against the chamber (again, his opponent in the race for Middletown supervisor was the chamber director) resulted only in the wasteful spending of taxpayer dollars. No mismanagement was found. And, of course, the chamber supports growing legal businesses in Delaware County.

Decisions made by government officials should be based on the good of “the people,” and should not be based on holding on to “power,” cronyism, and retaliation. The members of the board of supervisors who voted to strip the county chamber of its tourism promotion role should be ashamed of themselves. The residents of Delaware County should vote out of office government officials who base their decisions on feeling threatened and on vindictiveness.