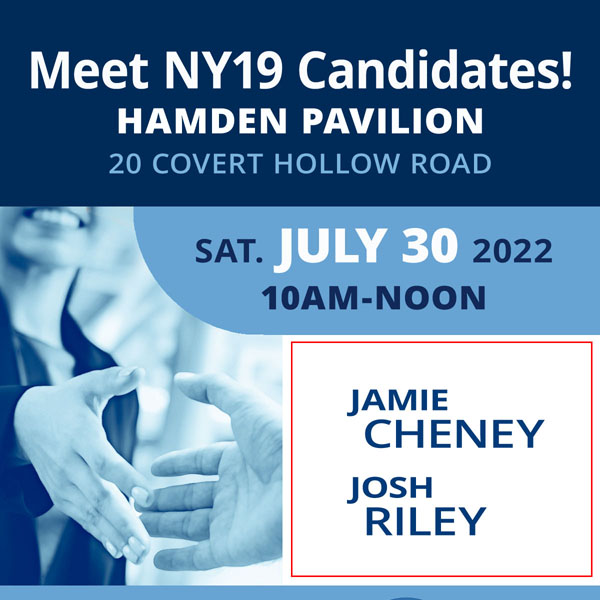 Be an informed voter on August 23rd…
Bring your questions to Hamden on July 30th.

Because our former Congressperson, Antonio Delgado, was appointed Lieutenant Governor of New York State, there will be a special election August 23rd to fill the remainder of his term in Congress (September-January 3, 2023). The Democratic candidate for that Special Election is Pat Ryan, a combat veteran, small business owner, and current Ulster County Executive.

Redistricting changes things for the next term starting January 3, 2023. Pat Ryan’s home will not be in the newly drawn 19th Congressional district. Pat will continue to run to represent where he lives — which will be the new 18th district.

Jamie Cheney and Josh Riley are the Democratic candidates running  to represent the new NY19th district from 2023-2025. Their Primary Election will also be held August 23rd. The Primary winner will be on the Democratic ballot line in the November 8 General Election.  Both Jamie and Josh  will be at the July 30 event in Hamden to meet voters and answer questions.

“We are fortunate to have such high-caliber candidates willing to step forward to represent us,” said Kathleen Hayek, chairperson of the Delaware County Democratic Committee. “These candidates are pro-truth, pro-equality, and pro-democracy.”

For information about Dem candidates and to see district maps, visit:
https://dcnydems.org/local-candidates/

For more information (how to request an absentee ballot, early voting (June 18-26) and more) visit:
http://co.delaware.ny.us/departments/elec/elec.htm